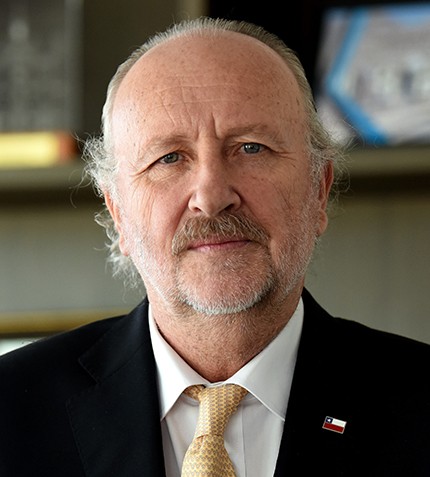 "Chile can maintain and increase copper production despite ore grade decline, and the aim of our government is to help facilitate an environment that encourages further investment in the mining industry.”

MINISTER OF MINING, GOVERNMENT OF CHILE

What are the most important initiatives and policies the Mining Ministry has promoted during your term?

The most important initiative was to help reactivate mining investments in the country and reshape the industry to become more environmentally friendly and productive. In addition, we have focused on providing strong support for small and medium-sized mining companies. During our term, the State-backed mining companies began working in lithium and we are working to improve the situation of the national mining company. We want to generate a new national mining policy that will help Chile sustain its competitiveness through 2050 and I believe that we have achieved progress in this area.

What progress is being made in Chile to reduce carbon emissions and make the country a leader in sustainable mining?

What production level do you expect Chile to reach for copper? Do you think the country to be able to maintain and grow copper production in the future?

We currently extract 5.5 million mt/y of copper and hope that by 2020 we can reach 6 million mt/y. We believe we can achieve this with the upcoming projects that are currently in development and with Codelco ́s pipeline of investments. Chile can maintain and increase copper production despite ore grade decline, and the aim of our government is to help facilitate an environment that encourages further investment in the mining industry.

How is the government incentivizing efficient use of water and technologies such as desalination?

Chile is experiencing its worst water crisis and its worst drought in the last 60 years. From that point of view, there has been a lot of effort on the part of the mining industry to reduce continental water usage. Today, 8% of Chile's copper mining projects use desalinated water and we expect that number to grow substantially in the future. There is a great effort to recycle water. That is why there are projects from companies like Anglo American, that recycle up to 80% of water and forecast to have 100% recycled water in the future.

In the wake of social unrest, how can the government reassure investors that Chile will remain a leading mining jurisdiction in the future?

Chile has a long history with a stable mining investment climate and the current situation will not erase that. The record of stability in Chile supports the idea that we will be able to resolve our differences and that the social turmoil we are seeing today will be solved. I think there are doubts regarding the referendum and the new Constitution, but it must be remembered that Chile has very clear laws protecting investors and respecting private property, freedom of expression and human rights.

What potential does Chile have to grow its presence in other minerals such as cobalt and to remain competitive as a lithium producer?

We are promoting investments from companies in cobalt mines so that this element, which is key to lithium-ion batteries, can be marketed and included in foreign investments in our country. The ultimate goal is for Chile to become a supplier of lithium-ion batteries to the global automotive sector. We want to jump into the value-added chain. We are the world’s second-largest lithium producer; we have salt flats, and we would like to get as close as we can to the manufacturing of batteries and the manufacturing of elements to store energy, which we believe could create more revenue, more jobs and more opportunities for Chilean families. Codelco and ENAMI have both signed agreements to develop projects and Codelco has committed to invest US$10 million for exploration in the Salar de Maricunga.