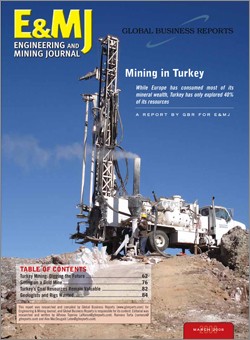 With mineral resources fully explored and consumed in Europe, one’s attentions turn to Turkey as a secure and important supplier of minerals to the continent. Istanbul Mineral and Metals Exporters’ Association (IMMIB) figures show that mineral exports amounted to $532 million in 1998, or 1.97% of total exports. In 2007, they stood at $2.72 billion (or 2.55% of all exports)—a staggering increase. Certainly, the industry has experienced heady growth over the last 10 years. Between 2006 and 2007, exports grew by more than 30%, for example. The overwhelming majority of these mineral exports head to the EU.

Today, the minerals industry is one of Turkey’s leading sectors and it has been proven that there are 4,400 mineral deposits in the country, excluding coal and petroleum. The government recognizes the potential that the mining industry presents for the Turkish economy. Over the last 20 years, bureaucratic red tape has lessened and the legal structure improved dramatically. Economic reforms in the 1980s resulted in widespread privatization and a new mining code was enacted in June 2004 to encourage the development of the sector. Certainly, the government has taken the necessary steps to ensure that firms operating in the sector are fully able to easily exploit potential resources and to invest effectively in building viable organizations, with modern, world-class structures, capable of competing against foreign firms.