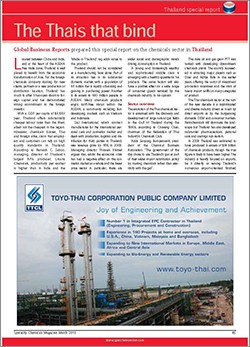 With a GDP per capita of $8,100/ year, Thailand offers substantially cheaper labor rates than the West, albeit not the cheapest in the region. However, chemicals bosses, Thai and foreign alike, claim that employers and customers can rely on high quality standards in Thailand. According to Ramesh C. Saboo, managing director of Thailand’s largest APIs producer, Linaria Chemicals, productivity per worker is higher than in India and the ‘Made in Thailand’ tag adds value to the product. Thailand should not be considered as a manufacturing base alone. Part of its attraction lies in its substantial domestic market, with a population of 65 million that is rapidly urbanizing and gaining in purchasing power. Another is its access to 580 million people in ASEAN. Many chemicals products enjoy tariff-free status within the ASEAN, a community including fast-developing markets such as Vietnam and Indonesia.