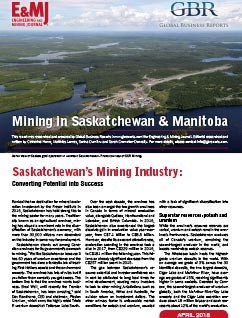 Saskatchewan sits on top of the world in more ways than one: northern Saskatchewan forms part of the Canadian Shield which is rich in minerals, with the province being the world’s leading producer of potash and second biggest producer of uranium globally. Saskatchewan was also ranked as the most attractive mining destination by the Fraser Institute in 2016 based on their geologic attractiveness and government policies, but slipped slightly to second spot in 2017. The industry has gone through tough times in recent years as uranium and potash prices have plummeted. Nevertheless, Saskatchewan’s Athabasca Basin occupies some of the highest grades of uranium globally, and there are many promising exploration projects underway. Also, May 2017 saw the grand opening of K+S Potash Canada’s Bethune mine, becoming the first new mine in Saskatchewan in over 40 years.

Manitoba, on the hand, is a less well-known mining destination but was ranked second by the Fraser Institute in 2016. Unfortunately, the province fell to 18th spot in the 2017 rankings as concerns over its permitting process and how it relates to First Nations consultations mounted. The province, however, deserves attention for its significant base and precious metals resources, such as nickel, copper, zinc and gold, as well as lithium and cobalt which are in high demand as the world transitions to clean energy technologies.