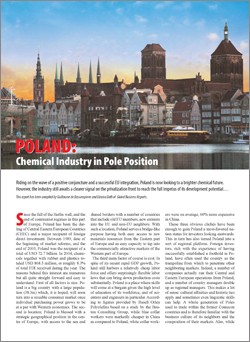 Since the fall of the Berlin wall, and the end of communist regimes in this part of Europe, Poland has been the darling of Central Eastern European Countries (CEEC) and a major recipient of foreign direct investment. Between 1989, date of the beginning of market reforms, and the end of 2003, Poland was the recipient of a total of $72.7 billion. In 2004, chemicals together with rubber and plastics totaled $868.3 million, or roughly 8.3% of total FDI received during the year. The reasons behind this interest are numerous but all quite straightforward and easy to understand. First of all factors is size. Poland is a big country with a large population (38.5 million), which, it is hoped, will soon turn into a sizeable consumer market once individual purchasing power grows to be at a par with Western economies. The second is location; Poland is blessed with a strategic geographical position in the center of Europe, with access to the sea and shared borders with a number of countries that include old EU members, new entrants into the EU and non-EU neighbors.