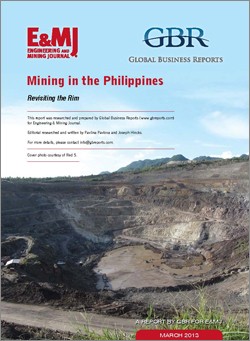 The 7,107 islands of the Philippines skirt the western fringe of the Pacific ring of fire, where volcanic activity mineralized much of the country: copper-gold porphyry systems abound under its surface and nickel laterites crowd its tropical soils. Mineral deposits, including copper, gold, nickel, chromite, limestone and semi precious stones are believed to exist in abundance in the Sierra Madre mountain range in Luzon and in the Mindanao region. The Mines and Geosciences Bureau (MGB), under the Republic of the Philippines Department of Energy and Natural Resources (DENR), estimates that the archipelago contains more than $840 billion worth of untapped mineral wealth.

The Philippine mining industry is beset by political uncertainty and contends with wide spread civil anti-mining sentiment. Of the Philippines’ 80 provinces, 14 had promulgated ordinances, such as open-pit mining bans, that contravene the country’s mining act. As of September 2012, a further six provinces and two cities were asking for a law to ban mining in their areas. In January 2011, President Aquino imposed a moratorium on the processing of all new mining agreements and cancelled over 500 existing applications. In formulating a new mining regime, the government hopes to stimulate investment, increase its share of revenues from mining operations, tackle illegal mining, and protect environmentally sensitive areas. Currently, reforms to the mining law are still ongoing, and more than 1,000 applications for new mining contracts remained on hold. The massive discrepancy between mineral potential and its exploitation reflects the highly complex relationship between the mining industry and Philippine society.