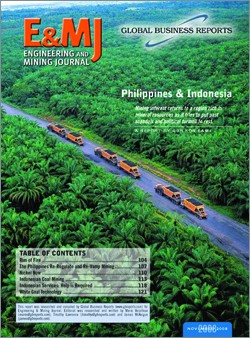 The Philippines and Indonesia together are made up of a total of nearly 25,000 islands. Located on the Pacific Rim of Fire, both countries have very high mineral potential. Move away from the rapidly urbanizing capital cities and underneath the ground, gold, copper, platinum, zinc, iron ore, tin, nickel, lead and coal (thermal and coking) can be found in the region. Despite acknowledged potential, neither country has returned to the halcyon days of the late twentieth century when the Philippines was in the top 10 gold producers worldwide and Indonesia could be found in the top four. What has happened to cause this drop off in production and can previous positions be re-attained?

The new millennium saw both countries suffering from the after effects of the Asian Financial crisis, a fall in commodity prices and the Bre-X scandal. Their combined effects seriously affected the mining industry, particularly exploration, in both countries. Junior exploration companies from Canada, Australia, the U.S., and Great Britain, with a few notable exceptions, simply cut their losses and ran. Slowly these juniors are returning to Indonesia and at a faster rate to the Philippines. Financial turbulence and scandal do not account for the whole story. Both countries have also experienced significant political change.