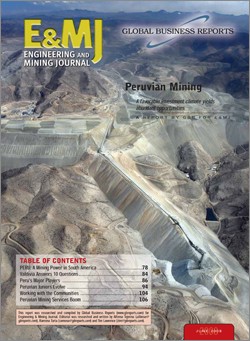 Peru is a land of opportunities for mining. It always was, but problems of political stability and the footprint of violent organizations such as the Shining Path were an insurmountable barrier for development until not too long ago. Today, production figures indicate that the country has a mature mining industry, but there’s so much more to come that the sector actually remains very young. According to the U.S. Geological Survey data for 2007, Peru is the world’s largest producer of silver; it ranks second in copper and zinc; and it is the third largest in tin, fourth in lead and fifth in gold. When looking at Latin America only, Peru is number one on all of these fronts with the obvious exception of copper, where Chile is still far ahead. At the current record prices of metals these high levels of production make an enormous impact on the country’s finances.