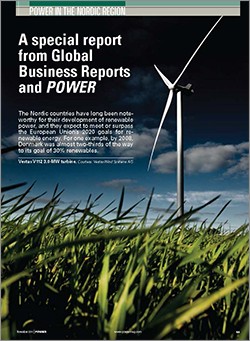 In an age characterized by growing concerns over energy and environmental issues, the Nordic countries are gaining a reputation for something altogether more uplifting than short days and long winters. They are taking an indubitable lead in the international push toward more efficient energy consumption and power generated from more sustainable sources. The 22% of electricity supply that Denmark harnesses from wind power is the highest proportion in the world. Sweden already generates approximately 97% of its electricity from carbon- neutral sources, Norway generates 98.8% of its power from hydro, and Finland generates 29.5% from renewable sources. In addition to making the most of available resources, the northern climate has arguably played a role in motivating these developments, as long cold winters require significant amounts of energy for heating and lighting.