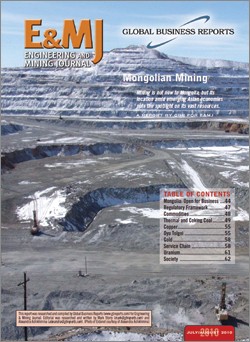 Mining in Mongolia is nothing new, but after years of being overlooked the spotlight is now on this vast country’s reserves. Mongolia’s mineral resources include gold, coal, copper, molybdenum, tin, tungsten and uranium. To date coal, copper and gold are the commodities, which have attracted the largest investments. Laurenz Melchers and Jim Dwyer, who heads the Business Council of Mongolia, defend Mongolia, despite the risk, as a good mining investment destination. They point to the reformed tax regime, the presence of major multinationals such as Rio Tinto, increased stability and an improving economic framework.