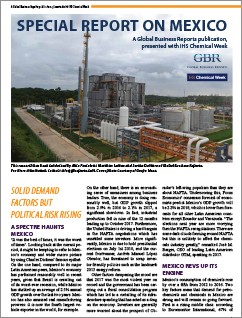 Mexico’s consumption of chemicals rose by over a fifth between 2012 and 2016, and will continue to grow faster than the national GDP, which is predicted to expand by 2.1% in 2017. Drivers include the consistent growth in the number of middle class households and their changing consumption habits; food and feed for agriculture; and, most importantly, a vast and dynamic manufacturing sector that is largely geared towards exports. Exports grew by 13.2% in the first ten months of 2017, fuelling demand for a huge variety of petrochemical and chemical products.

Nevertheless, investors are nervous. Elections scheduled for 2018 risk unraveling current President Enrique Peña Nieto’s ambitious energy reforms if rival candidate Andrés Manuel López Obrador is victorious; the NAFTA trade agreement is under revision and the outcome uncertain; and the petrochemical industry in the USA is undergoing a revival based on shale that is broadening Mexico’s trade deficit in petrochemicals.

GBR has met with executives from across the industry and reports their concerns and objectives along with our own analysis of the current state of the industry.