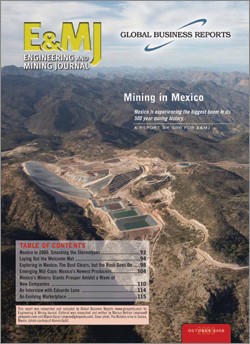 Mexican mining in 2007 made up 1.6% of the country’s GDP. According to Norberto Roque, Mexico’s general coordinator of mining, the sector accounted for $8.1 billion, rising to some $10.2 billion with the inclusion of metallurgical activities. The first figure represents a 13% increase on 2006 and a whopping 65% increase on the year before that, even though ongoing, illegal strike action has ceased operations at three of Mexico’s largest copper mines has scythed off some $700 million worth of production. On the whole, the picture is extremely positive with Mexican mining companies posting record profits, while in the region of 250 to 285 foreign companies are busily exploring, developing and producing.

While 70% of the country remains unexplored, current production is already very significant. In 2007, Mexico had the highest percentage increase in gold production, rising some 9.6% to a still modest 39 metric tons (mt). Silver production, on the other hand, dropped by some 4.3% to 2,300 mt of processed silver, still enough to occupy second place in global production after Peru. Despite strike action, Mexico came in 12th internationally in copper production with some 323,000 mt, a 1.3% reduction on last year. Mexico produced 417,000 mt of zinc in 2007, a 3.6% diminution on 2006, again the result of strike action at Grupo Mexico, but also lower production figures from Peñoles’ Naica, Francisco I. Madero and Sabinas mines.