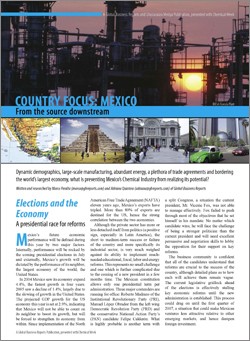 The chemical industry in Mexico has been in decline over the past decade, due mostly to uncompetitive feedstock prices from the government-owned monopolistic oil company, Petróleos Mexicanos (PEMEX). Oil, gas and electricity in Mexico are among the most expensive in the world. Understandably, the chemical sector is concerned with the companies’ inefficiencies, uncompetitive pricing structure, political affiliations and deteriorating infrastructure, as they are largely reliant on PEMEX to power their production. Over the past two years the company has posted record levels of profitability due to the high global oil prices, a trend set to continue for the next couple of years, but not one that PEMEX can count on in the long run.

There has been much debate and a great deal of frustration felt by companies on account of successive government’s inability to steer through much needed energy reforms. To further emphasize the need for private investment, the majority of remaining unexplored reserves in the Gulf of Mexico is considered deep-sea, which entails technology for exploration and extraction that Mexico does not possess. Regardless of the energy conditions companies are forced to work under, there are local and multinationals posting strong growth and profits.