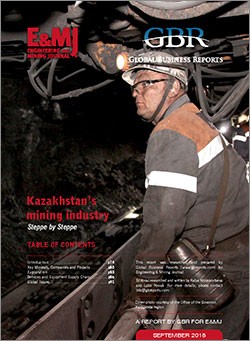 Kazakhstan has long been overlooked as a major mining destination, but with vast untapped riches, it seems destined to become the next mining hotspot. The mining and metals sector of Kazakhstan already contributes roughly 19% to its GDP and 16% to overall exports. It is the fourth largest copper producer with 40 million metric tons in proven reserves, has the world’s ninth largest proven gold reserves, and contains similar levels of zinc. Almost all gold mining companies and properties have been fully privatized in Kazakhstan. Its reserves represent 30% of world supplies of chrome, 25% of manganese, 10% of iron ore, 10% of copper and 13% of lead zinc. Kazakhstan is also the largest producer of uranium as of 2009, and produced 38% of world production in 2013. To top all this, Kazakhstan’s substantial mineral resources include the world’s largest chromium, vanadium, bismuth and fluorine deposits, and is richly endowed with bauxite, coal, phosphate, titanium and tungsten.

Despite these prodigious resources, Kazakhstan has seen little exploration in the last 30 years, with the last large-scale exploration happening in the 1950s. The Soviet era data is still available and, although of excellent quality, it is not always complete. The government has recognized that Kazakhstan, already harnessing its oil and gas resources, can become a major mining destination that could rival countries such as Canada, Australia and Russia, but new exploration projects and substantial changes to its mining laws as well as the investment environment are needed.