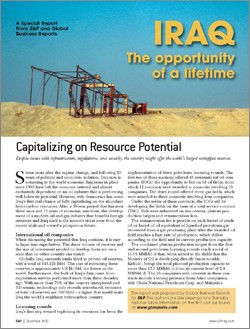 Seven years after regime change, and following 20 years of political and economic isolation, Iraq now is returning to the world economy. Sanctions in place since 1990 have left the economy tattered and almost exclusively dependent on an oil industry that is performing well below its potential. However, with democracy has come Iraq’s first real chance of fully capitalizing on the abundant hydrocarbon resources. After a 30-year period that has seen three wars and 13 years of economic sanctions, the development of a modern oil and gas industry that benefits foreign investors and Iraq itself is the nation’s ticket away from the recent trials and toward a prosperous future.