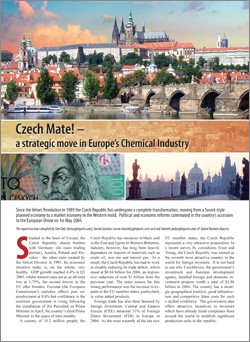 With the Czech Republic now over a year into life as a fully fledged member of the European Union, its government is proudly pointing to higher exports thanks to accession. However, many claim that joining the EU was of little consequence, since all the necessary groundwork in conforming to EU standards was carried out in the years preceding accession. In the chemical sector the reaction to EU membership is far from consistent. The most positive response came from Spolchemie, situated close to Germany in Usti nad Labem and a real key player in epoxy resins, who now considers the entire European Union its domestic market.

Yet for many smaller companies, any hopes that EU membership would enable them to penetrate traditional Western European have been dashed. Due to the saturation of markets in these countries, Czech companies lack the capacity and ambition to look to the West and have their sites fixed on Eastern markets.