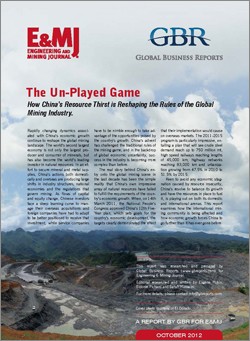 The world’s second largest economy is not only the largest producer and consumer of minerals, but has also become the world’s leading investor in natural resources. In an effort to secure mineral and metal supplies, China’s actions both domestically and overseas are producing large shifts in industry structures, national economies and the regulations that govern mining. As flows of capital and equity change, Chinese investors face a steep learning curve to manage their overseas acquisitions and foreign companies have had to adapt to be better positioned to receive that investment, while service companies have to be nimble enough to take advantage of the opportunities poised by the country’s growth. China’s advent has challenged the traditional rules of the mining game, and in the backdrop of global economic uncertainty, success in the industry is becoming more complex than before.

The real story behind China’s entry onto the global mining scene in the last decade has been the simple reality that China’s own impressive array of natural resources have failed to fulfill the requirements of the country’s economic growth. When, on 14th March 2011, the National People’s Congress approved China’s 12th FiveYear plan, which sets goals for the country’s economic development, the targets clearly demonstrated the effect that their implementation would cause on overseas markets. The 2011-2015 program is particularly impressive, entailing a plan that will see crude steel demand reach up to 750 million metric tons, high speed railways reaching lengths of 45,000 kilometers (km), highway networks reaching 83,000 km and urbanization growing from 47.5% in 2010 to 51.5% by 2015.

This report examines how the international mining community is being affected and how economic growth forces China to go further than it has ever gone before.