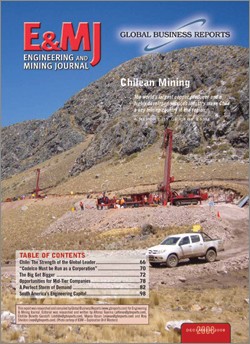 Displaying a business-friendly environment and some massive copper deposits, Chile is comfortably positioned as the planet’s giant in the red metal, with an annual output over four times as big as the second nation in the ranking, neighboring Peru. After 5.5 million metric tons (mt) in 2007, Chile’s production for 2008 will be around 5.7 million mt and the government hopes that the barrier of 6 million mt will be breached in 2009. Taking into consideration the high copper prices of the last couple of years, one can imagine the impact of such figures in a country with less than 17 million people. Copper accounts for more than one fifth of the gross domestic product (GDP). And although it doesn’t hit the headlines that often, Chile also excels in very profitable production of molybdenum, around 45,000 mt last year (21% of the world’s total) and has been substantially increasing its silver production to reach 1,936 mt in 2007, placing itself as the world’s No. 4 silver producer after Peru, Mexico and China.