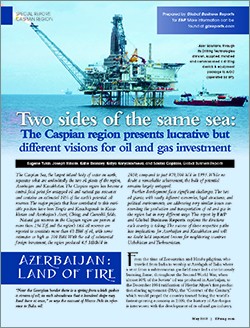 The Caspian Sea, the largest inland body of water on earth, separates what are undoubtedly the two oil giants of the region, Azerbaijan and Kazakhstan. The Caspian region has become a central focal point for untapped oil and natural gas resources and contains an estimated 10% of the earth’s potential oil reserves. The major projects that have contributed to this enviable position have been Tengiz and Karachaganak in Kazakhstan and Azerbaijan’s Azeri, Chirag, and Guneshli fields. Natural gas reserves in the Caspian region are proven at more than 236 trillion cubic feet, and the region’s total oil reserves are reported to constitute more than 60 billion barrels of oil, with some estimates as high as 200 billion barrels. With the aid of substantial foreign investment, the region produced 4.5 million barrels per day (bpd) in 2010, compared to just 870,000 bpd in 1995.

While no doubt a remarkable achievement, the bulk of potential remains largely untapped. Still, further development faces significant challenges. The two oil giants, with vastly different economies, legal structures, and political environments, are addressing very similar issues surrounding the production and transportation of oil and gas in the region but in very different ways. The success of these respective paths has implications for Azerbaijan and Kazakhstan and will no doubt hold important lessons for neighboring countries Uzbekistan and Turkmenistan.