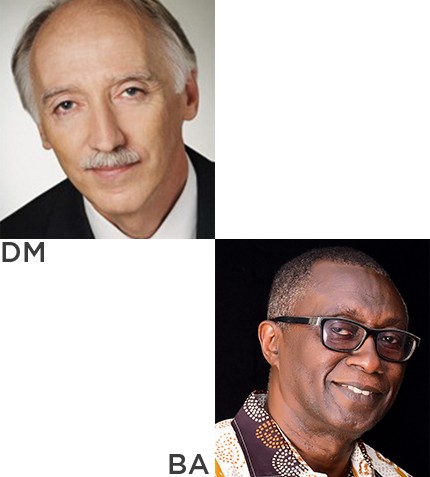 "In the very near future, we hope to be fully financed to build our first mine. Our resource now contains some 350,000 oz, and by the time Kubi is mined out we expect it will have produced plus 750,000 oz to 1 million oz."

How has the Covid-19 affected Ghana and its mining industry?

Ghana has been reasonably spared, with a low rate of cases and deaths. The government reacted quickly and closed the airports and borders before the infection could be imported in any large numbers. Over the last month, most of the facemasks have disappeared and normalcy is returning. At Asante Gold, none of our employees have reported sickness or know anyone that has gotten sick.

Could you bring us up to the date with the latest developments at Kubi gold mine?

Kubi is our lead project, a 350,000-ounce (oz) resource that has a proposed production rate of 40,000 oz Au/y, suggesting nine years’ worth of production. We have been in the market for the past three years looking for funding to develop the mine, which has been an elusive process, but the good news is that for every US$100 that the gold price rises, the value of Kubi goes up by US$10 million. Therefore, a CAPEX of US$25 million is not an insurmountable problem, and we are hoping that in the foreseeable future we will be fully financed to start construction.

Can you provide more details about the mining method that Kubi lends itself to?

We expect Kubi to be a small but rich underground gold mine, with a small environmental footprint. The backfilled pit is already there from previous operations, which provides us with the portal location and flat ground to build the infrastructure. The mine will be powered with solar energy, through a planned 4 MW solar plant. We have also considered an exciting new mining method whereby the orebody is mined out by large diameter drills. This method could cut in half conventional underground mining costs, when applied to the right type of ore body: near vertical, very linear, and consistent, which Kubi fits. For now, we are keeping an open mind to it and see how it develops in the future.

In Ghana, originally horizontal sedimentary rocks have been folded into near vertical structures, so orebodies tend to plunge to depths that are say ten times the strike length. At Obuasi, they are now mining down at 2.5 km, and academics say the mineralizing system goes down at least 7 km.

As we enter what seems to be the beginning of a bull market, how does Asante Gold capitalize on the record high gold prices?

First by raising the necessary CAPEX to move Asante Gold into production. The current market dynamics become a very catalytic event that puts everything into motion: once we are funded, the market capitalization of Asante should change to the upside because we are only 10-12 months from our first production, and expect full production using our toll milling model within 18 months.

How do you think the government could better support and incentivize small-to-medium-sized players in Ghana’s mining sector, and do you think the upcoming elections could shake the mining policy?

There are not very many juniors like Asante in Ghana, so who is doing the exploration to replace the big mines? The big companies prefer not to take exploration risk and instead to buy out successful juniors.

Notwithstanding the results of the elections, I do not believe either party would overly interfere in the successful Ghanaian large-scale mining industry.  If you look at the surrounding countries, like Ivory Coast, Burkina Faso or Mali, they have been influenced by the Ghanaian model and created similar policies in their own countries, trying to ease up some of the taxes. If there will be any change at all, this will likely be in favour of foreign direct investment coming into the country.

What would you like to have achieved at Asante Gold in the next 1-2 years, and do you have a final message for potential investors?

In the very near future, we hope to be fully financed to build our first mine. Our resource now contains some 350,000 oz, and by the time Kubi is mined out we expect it will have produced plus 750,000 oz to 1 million oz. Strong gold prices will help us raise money to expand further and aggressively explore our other concessions and make new, large discoveries.