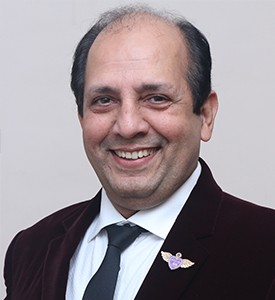 "Rising competition in the pure generics segment has led many of the top Indian pharmaceutical companies to focus increasingly on specialty and complex generics through higher R&D spending. Many companies are investing in complex injectables, complex oral solids, new drug delivery systems, new chemical entities and biosimilars, as well as looking to increase their presence globally in the therapeutic areas of oncology, dermatology, ophthalmology and respiratory, among others."

How has India's pharmaceuticals industry, particularly with regards to manufacturing, grown since we last spoke in 2017?

Could you highlight some of the activities of the IDMA, its goals and contribution to the industry?

IDMA contributes by guiding the industry in improving quality and efficacy through our annual Pharmaceutical Analyst Conventions, which have been held since 1997. Almost all leading regulatory agencies have attended the Convention in the past and assisted in resolving quality and regulatory related issues. IDMA also works towards the harmonization of various Pharmacopoeias.

IDMA regularly organizes seminars, training programs and workshops for the benefit of members and the pharmaceutical Industry at large. In collaboration with Department of Pharmaceuticals, Ministry of Chemicals and Fertilizers, IDMA successfully organized a series of workshops on ‘GMP Workshop for SMEs – Schedule M & Beyond for Global Quality and Compliance’ and a seminar series on ‘Meeting Quality Challenges & Achieving Global Compliance’ all over India. IDMA also works very closely with the Indian Pharmacopoeia Commission in compiling and bringing out the Indian Pharmacopoeia.

IDMA plays an active role in many policy discussions and suggestions. Timely and effective representations to Government authorities for quick resolutions of issues and quick response to members‘ queries is one of IDMA’s main strengths.

IDMA recognizes excellence and achievements in various fields and gives away annual awards such as IDMA Quality Excellence Awards in manufacturing of APIs and Formulations. The organization also leads the way in CSR activities. When Prime Minister Narendra Modi initiated the Swachh Bharat Mission, IDMA took an active role in the cleanliness drive and was recognized with the ‘Indian Pharma Swachhta Champion Award.’

IDMA has been working on a strategy to make India the largest global producer of safe and efficacious quality medicines at reasonable prices by 2020. How has this objective developed?

Today, India enjoys an important position in the global pharmaceuticals sector and is the single largest provider of generic drugs globally, supplying over 50% of global demand for various vaccines, 40% of generic demand in the United States, 25% of all medicine in United Kingdom and extremely low cost medicine to African nations. Presently, over 80% of the antiretroviral drugs used globally to combat AIDS are supplied by Indian pharmaceutical firms.

Over the years, IDMA has been continuously dedicated to the welfare of progressive SMEs, and it is a matter of pride that many of the SMEs of yester years have become large-scale national companies now. We regularly coordinate with the Government to support progress in our SME sector and today, there are over 2,000 WHO GMP approved plants. It is estimated that another 1,000 SMEs will be WHO-GMP compliant in the next 3 to 4 years, which will add to the growing strength of the industry. Indian firms accounted for 35-40% of the global USFDA 971 approvals in 2018.

How does India currently fare in competition for market share globally?

Indian pharmaceutical companies are experienced in servicing top multinational companies in their highly regulated markets, meeting their stringent quality expectations. The price competition is high in India, with a number of manufacturers for almost each molecule and its formulation.  However, this competitive spirit has helped Indian manufacturers to compete globally. Today, Indian pharmaceuticals and APIs are exported to more than 200 countries around the globe including highly regulated markets of US, West Europe, Japan and Australia. India is the largest supplier of medicines to WHO and UNICEF. It is estimated that every third tablet consumed anywhere in the world is ‘Made in India’ and every third child vaccinated globally is from a vaccine ‘Made in India.’

Since Narendra Modi came into power there have been several changes to the nation’s governance as a whole - how has this impacted the pharmaceuticals industry?

The Government of India has supported the pharmaceutical sector and has been working towards resolving long standing issues. Industry specific schemes such as Pharmaceutical Technology Upgradation Assistance Scheme (PTUAS) have been initiated. The best thing that has happened under the present Government is implementing GST as one Nation one Tax One Market. It has ensured that the burden of multiple taxes plaguing the pharmaceutical sector has been removed, and the introduction of Input Tax Credit under GST has largely worked towards eliminating the anomaly of inverted duty structure while also playing a significant role in supply chain management.  Another landmark initiative of Shri Modi is the Ayushman Bharat Yojana, which is already becoming the world’s largest free healthcare scheme for providing free treatment up to Rs 5 lacs per year to approximately 500 million poor people in the country. We are actively supporting this historic venture. Pharmaceutical consumption is expected to increase drastically as a result of this scheme.

What are the repercussions of increased USFDA stringency and regulatory changes?

The frequent changes in regulatory guidelines create chaos in pharmaceutical development and manufacturing. While bad laboratory practices are usually at the root of the suspect data that inspectors are finding all over the world, in India, there have also been a couple of high-profile cases related to documentation that are bringing the manufacturing sector under particular scrutiny.

India is renowned as the largest producer of generic drugs, however, the focus has been shifting towards increased R&D. How do you perceive these dynamics today?

Rising competition in the pure generics segment has led many of the top Indian pharmaceutical companies to focus increasingly on specialty and complex generics through higher R&D spending. Many companies are investing in complex injectables, complex oral solids, new drug delivery systems, new chemical entities and biosimilars, as well as looking to increase their presence globally in the therapeutic areas of oncology, dermatology, ophthalmology and respiratory, among others.

The Government of India is also supporting industry with tax incentives for R&D. The PTUAS is being implemented to encourage more SMEs to get WHO GMP and other international approvals. Industry Academia collaboration in R&D leading to manufacturing innovated products is a win-win situation for the better use of intellectual resources.

What are some of the key challenges to address moving forward?

Stringent rules in clinical trials, environment clearance and the proposed stringent revision in Schedule M are some of the key challenges. In addition, high ‘out of pocket’ expenditure limiting access to medicines, changing disease patterns leading to increased healthcare expenditure, continuous pressure to make drug prices more affordable and facilitating fiscal and tax incentives required by the SMEs to help driving their growth are persistent challenges.

Despite continuous growth of the Indian pharmaceutical market, quite a large number of small-scale pharmaceutical units have been compelled to shut their operations for not being able to adequately cope with the tough business challenges and competitive pressure. As the country moves ahead, these challenges, coupled with fierce competitive pressure, could further escalate, if not attended to with strategies by the individual companies and the support given by the Government’s robust healthcare-reform oriented policy measures.