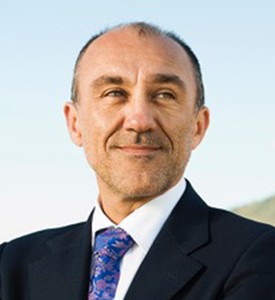 “We predict that in the near future, the share of solar energy powering mining operations in an economic way will exceed 20 or 30% thanks to the introduction of more economic battery storage and to the adaptation of mine operations to maximize daytime solar energy.”

Can you give a brief overview of Total Eren and the transformation of the company since the merger with Total in 2017?

EREN Renewable Energy, which is the former name of Total Eren, was created in 2012 by the former founders and management of EDF Renewables, a renewable energy subsidiary wholly owned by French electric utility EDF. Total Eren is a renewable energy Independent Power Producer (IPP), mostly focusing on emerging markets to deliver wind, solar and hybrid energy solutions, with 1.3 GW installed or under construction worldwide.

Our activity is very capitalistic; solar and wind power plants consist mostly of a very large initial investment with very limited operating cost. After developing and investing in the first few hundred megawatts of solar with its own initial equity, the company’s business development was promising, and it was decided to raise additional funds to be able to invest in more projects. Initially we raised two tranches of 100 million Euros each with French Public Investment bank Bpifrance, Next World, Tikehau Capital and FFP. In 2017, after going through an additional fund raising exercise to fuel more growth, interest was expressed by Total, quickly followed by the elaboration of a strategic partnership. Upon approval by French regulatory authorities, Total would initially invest 237 million Euros in EREN Renewable Energy – rebranded Total Eren – and as a result would indirectly own 23% of the company, with an option to take it over after 5 years. This strategic partnership is deeply rooted in Total’s appetite to diversify into the energy and electricity sectors, and we find many synergies between our activities. For instance Total often provides fuel and lubricants to mining companies we are in discussions with, so our solar energy offering comes as a very interesting complement to theirs.

Can you elaborate on the success of Total Eren’s recent project with IAMGOLD in Burkina Faso?

Given my background in the diesel and gas power industry, I saw the significant opportunity to reduce fossil fuel consumption in large power plants by adding renewable energies such as solar very early on. When I joined EREN Renewable Energy at the end of 2014 to initiate and develop our business in Africa, one of our priority market development angles was therefore to develop a B2B market segment where we would replace thermal energy with renewables for isolated industries relying on diesel for their energy needs.

Such is the case for IAMGOLD’s Essakane gold mine in Burkina Faso: it is very remote and far away from the national utility service. The mine’s only option to generate power was to use heavy fuel to generate electricity in their diesel power plant.

Total Eren had established a joint venture with its AEMP partner to develop renewable energy solutions for the private market in Africa. Together, we established a plan to develop, build, own and operate a 15-megawatt solar PV power plant that would to sell energy to IAMGOLD’s Essakane gold mine. Under this project, the mine did not have to engage in any capital expenditure, but only had to enter into a power purchase agreement with us, under which they would purchase solar energy for a fixed competitive price, over a long-term period.

The plant has been in operation since the second quarter of 2018. It performs exactly as we planned, it reduces the mine’s fuel consumption by roughly 500 tons per month and today it is the largest hybrid plant in the world. It has been designed, built and realized through a fully private scheme, without subsidiaries of any sort. The project was initially funded by us, but the bankable quality of the development enabled us to refinance part of the project with local bank BICIAB in Burkina Faso.

Can you elaborate on Total Eren’s strategy to expand within Africa, and specifically highlight the opportunities you see in the mining industry?

Total Eren is looking at Africa energy development from three different angles. Firstly, we provide solar and wind energy to utilities, such is the case since 2016 with a 10 MW project in Soroti, Uganda. We will soon complete the construction of two 63 MW solar plants in Egypt, and our ongoing developments will further reach out to many countries in Africa. Secondly, we are also looking at powering off-grid rural communities with our joint venture partner Winch Energy, with units operating in Uganda, Benin or Mauritania. Thirdly, with regards to the mining sector, we look at projects across the entire continent. For instance, “we follow the gold” in Burkina or Mali. Within the gold mining industry, rock crushing is a very energy-intensive process, often located away from national utilities, which creates an interesting opportunity for solar. Large remote energy intensive mines with a long enough life time to justify investing in a dedicated solar plant can also be found in diamond, platinum or copper producing countries.

To what extent is there interest from the mining industry to work directly with Total Eren in terms of financing projects?

For economic reasons, renewables are given a lot of attention by the mining industry. Total Eren’s value offering to the mining industry is a low cost, low carbon, and fixed priced energy, independent from fuel price variations, and at no CAPEX for the mine. We control and assume technical risks and we deliver, therefore financing institutions trust our projects, which in turn enables us to finance our projects with attractive debt and deliver very competitive energy to the mining sector. Renewable energy projects are full CAPEX projects that cannot be relocated easily, therefore we need certainty that the mines will buy our energy over the long term before we build a power plant.

What are Total Eren’s vision for its role in the mining industry moving forward?

Total Eren is paving the road for renewable energy to become a standard source of energy for the mining industry. We predict that in the near future, the share of solar energy powering mining operations in an economic way will exceed 20 or 30% thanks to the introduction of more economic battery storage and to the adaptation of mine operations to maximize daytime solar energy.