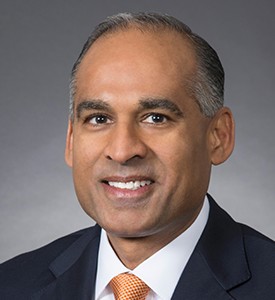 "We have a very strong position in North America, Europe and a reasonably good position in Asia, but in Latin America we do not have many assets in what we believe will be a very important market over time, with growing middle classes in countries like Brazil and Mexico."

What is LyondellBasell’s footprint in the Americas?

We have a very significant US division in olefins and polyolefins, including polypropylene. We have several steam crackers in the Gulf coast, and two Midwest crackers for a total ethylene capacity of more than 12 billion pounds. We also have a very large polyethylene position and quite a bit of that is high density polyethylene. Going further south, we have the Indelpro joint venture in Mexico, and we have polypropylene compounding capacity in Mexico, Brazil and Argentina.

In 2013 through 2015, our growth was focused on debottlenecking of existing capacity of mainly ethylene at La Porte, Corpus Christi and Channelview. Now, we are building new polyethylene capacity to match those ethylene expansions. Our first new polyethylene plant is under construction and we aim to start production in 2019. It has our new Hyperzone technology for the production of differentiated high density polyethylenes. Additionally, we are building the world’s largest propylene oxide and tertiary butyl alcohol plant on the US Gulf Coast. This is a US$2.4 billion project and is the largest single capital investment in the history of our company.

How does the company see Latin America, especially with the potential deal to acquire Braskem?

We have a very strong position in North America, Europe and a reasonably good position in Asia, but in Latin America we do not have many assets in what we believe will be a very important market over time, with growing middle classes in countries like Brazil and Mexico. That is part of the rationale for us considering the acquisition of Braskem. The potential combination of LyondellBasell's and Braskem's complementary strengths, product portfolios and operational footprints would create significant value for our shareholders, customers and employees.

Latin America is absorbing petrochemical products from the US. Do you think the region will catch up with local capacity?

Importing feedstock, just because of the shipping cost, puts the importing region at a disadvantage. Also, infrastructure challenges in countries like Brazil and Argentina make the Asian markets more accessible for exporters from the US. Longer term, more locally available feedstock would be the key for future growth and competitiveness in Latin America. I am starting to see very good potential – for example, the development of the pre-salt oil fields in Brazil and the shale gas in Argentina.

How do you read the trade negotiations by the US administration?

We support the modernization of NAFTA, but NAFTA itself is a very critical agreement to take advantage of the strengths that the US, Mexico and Canada have. Tariffs between the countries increase cost burdens and this could discourage continued investment in the US. Tariffs also weaken the shale gas advantage, which has allowed the country to build new plants and create more employment. As a company, tariffs make us rethink how much we should build in terms of export-oriented capacity.

What is LyondellBasell’s approach toward sustainability?

Plastics, in themselves, are a great sustainability story in terms of how they enable everyday life. With polyethylene, our innovative pipe resins help deliver clean, fresh water to many parts of the world, and also gas – we are one of the industry leaders in the high density pipe market. Moreover, in food packaging, one of the great sustainability stories about plastics is that they keep food fresh for longer, and you can package it in a size that is accessible to the wider population. Finally, our polypropylene business, especially the compounding business, is geared towards automotive, where we replace higher weight materials. Lighter weight ultimately improves fuel efficiency and reduces carbon emissions.

What we have to solve, especially in packaging, is what happens to the plastics after they are consumed. At LyondellBasell we have created a circular economy joint venture with SUEZ in Europe called QCP, which stands for Quality Circular Polymers. Also, we have forged a partnership with the Karlsruhe Institute of Technology to do innovation around molecular recycling. We are trying to create technology to unzip the plastic pack to its source as a chemical feedstock to produce new polyethylene. This is a bit more longer term, but it could be a great solution for a more sustainable circular economy around plastics.