The ‘S’ word is a wide-reaching concept that demands a joint effort on many fronts by governments, the industry, and the wider population. 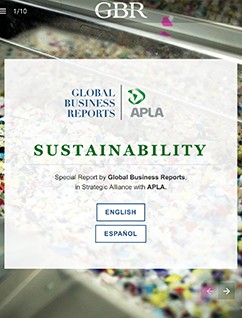 What is sustainability? When has a company achieved operations that can be defined as sustainable? These questions are not easy to address. We live in an era marked by rapid change and mass consumption, trends that can only persist considering expected global population growth: according to the United Nations, the Earth will be home to 9.8 billion people by 2050, in comparison to 7.6 billion in 2017.

The planet has been sending alarming signals for years, from global warming, to ocean contamination by plastics, to the predation of natural resources. Indeed, between January 1 and August 1, 2018, the human race used a year’s worth of the planet’s resources, according to the Global Footprint Network. Last year’s so-called ‘Earth Overshoot Day’ is the earliest ever. In other words, says the organization, we are using 1.7 Earths per year at the current rate of consumption.

In this context, how can organizations in the petrochemical and chemical industries promote sustainability across different areas, and with concrete actions and goals? A look at Brazilian giant Braskem’s 2017 annual report sheds some light on how big industry actors are approaching the issue. The company has defined three core priorities (climate change, water and plastic waste), and then further identifies 10 specific areas where they have set ‘macro-goals’ to be met by 2020.

These areas include safety, post-consumption (recycling), development of local communities, climate change objectives, use of renewable feedstock and renewable energy, and also topics directly related to the company’s performance, such as the generation of healthy profits to guarantee the future of the operations, and the development of good solutions for clients.

In nine of the 10 areas delineated, progress shown was excellent, with a rate of goal fulfillment between 73% and 100% by 2017; yet, the exception was in post-consumption, as only 1% of the 2020 objectives had been met by the end of 2017. This is indicative of the sheer scale of the recycling problem that the industry, together with the rest of the stakeholders, currently faces.

Beyond plastics pollution, which is the subject of a separate article in this report, another key area that needs to be addressed in the context of sustainability is carbon emissions.

The Paris Agreement of 2015 entered into force in November 2016, and to date has been ratified by 184 of the 197 parties to the United Nations Framework Convention on Climate Change (UNFCCC). The Agreement’s objective is to keep the global temperature rise in the 21st century below 2 degrees Celsius above pre-industrial levels. During COP24 in Poland in December 2018, the different parties finally approved a range of measures to make the Paris Agreement operational starting 2020.

President Donald Trump’s announcement that the United States (US) will abandon the agreement has caused deep concern in the international community, considering the US represents nearly 18% of the world’s greenhouse gas emissions. For now, however, the treaty does not allow any ratifying country to depart before November 2020 – coincidentally the date of the next US presidential election.

In Latin America, the countries with the biggest emissions correspond to the largest economies: Brazil and Mexico represent around 2.5% and 1.7% of the world’s total emissions, respectively. Indeed, this is one of the key issues that the Mexican chemical industry wants to address with the new López Obrador administration, with a focus on the implementation of the carbon credit market in the country.

Miguel Benedetto, director general of Mexico’s National Association of the Chemical Industry (ANIQ), declared: “The federal government has committed to a 30% reduction in greenhouse gases by 2030, and a 50% reduction by 2050. In this respect, all industrial sectors will have to contribute significantly for Mexico to achieve these goals.”

Meanwhile Marina Mattar, director of Institutional Relations and Sustainability at the Brazilian Association of the Chemical Industry (Abiquim), assured that the chemical industry was the first industrial sector in the country to take a position on carbon pricing. “We are doing a lot of work with regard to carbon pricing and we have already reduced almost 30% of our emissions in the last 10 years in the chemical sector,” she said.

Mattar added that, while awareness about sustainability has increased across different segments of society, the industry has been working on important initiatives for many years: “We started implementing the Responsible Care program 25 years ago, at a time when sustainability was not even part of our vocabulary.”

Another key aspect is water efficiency. In Latin America and worldwide, the use of water by different industries, be it mining, agriculture or chemicals, can easily escalate into a conflict with local communities, either over fear of water being polluted, or for the simple fact that the water resource may be scarce in the area.

Jorge Soto, Sustainable Development director at Braskem, explained that the company has worked in parallel on both climate change and water efficiency initiatives: “Braskem has reduced the intensity of greenhouse gas emissions by 21% from 2008 to 2017, and more than 25% of the water Braskem utilizes comes from reuse,” he emphasized, adding that the company is included on the A list for climate and water by CDP (formerly the Carbon Disclosure Project).

PRODUCTS FOR A GREENER FUTURE

In addition to recycling, the quest for a circular economy also involves the use of renewable energies and renewable feedstock for the production of chemicals – a transformation that also results in a reduction of carbon emissions.

Jorge Soto of Braskem provided more details on the green PE produced at Triunfo, and its impact on carbon emissions: “This biopolymer is exceptionally eco-friendly, since the process used to produce each tonne of polyethylene from the primary raw material removes more than three tonnes of carbon dioxide from the atmosphere.”

As companies feel the pressure by consumers to improve the environmental footprint of all their processes, green chemicals will increasingly have a wider market. Soto explained that Braskem has forged partnerships to supply green PE to clients that have sustainable development as a pillar of their market strategy, including players such as Tetra Pak, IKEA, Lego and Johnson and Johnson.

Innovation, however, does not stop there and applies to many market segments: “We have launched a joint venture with DSM for the production of omega-3 fatty acids for the salmon and pet food industries. This is a breakthrough for animal nutrition because, for the first time, it will enable production without using fish oil that puts a strain on the oceans’ resources,” Toscano said.

The constant flow of news regarding plastic pollution, including upsetting images of animals choked by plastic, has been damaging to the industry’s reputation. Yet, the use of chemicals and plastics is commonplace in daily life, and people are often unaware of the convenience and benefits they afford.

“Plastics, in themselves, are a great sustainability story in terms of how they enable everyday life,” said Bob Patel, CEO of LyondellBasell, further mentioning some examples of the day-to-day applications of the company’s products: “With polyethylene, our pipe resins help deliver clean, fresh water, and plastics also keep food fresh for longer. Then, our polypropylene compounding business for automotive helps replace higher weight materials, improving fuel efficiency and reducing carbon emissions.”

Jorge Soto of Braskem added some more items to the list of segments where plastics have a positive impact: “We need to think of healthcare, easy and cheaper mobility and housing, and more resilient infrastructure. Plastics will also bring the possibility of distributed manufacturing through the mass use of 3D printing.”

Yet the heads of industry agree that none of this will be possible if humanity cannot find a solution to the problem of solid waste management. Speaking in 2017 in preparation for the APLA annual meeting in Rio, another Braskem leader, executive vice-president Edison Terra Filho, concluded: “Plastics are one of the smartest materials available – however, taking care of the full product cycle is the final frontier for plastics. If we reach that goal, the material could be unbeatable.”