Argentina has seen production of precious metals fall as old mines become depleted and investors wait for expected political reforms to be implemented. 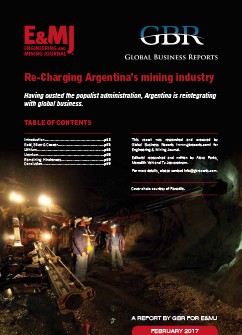 Due to the depletion of the Mina Pirquitas mine and decreased production from both PanAmerican Silver’s Manantial Espejo and Austral Gold’s Casposo, exports of gold and silver have decreased considerably. The temporary suspension of Barrick’s Veladero mine, as a result of a 224,000 liter cyanide solution spill, has greatly impacted both gold output and Argentinian acceptance of mining in general. The general public has very openly scrutinized the impermanence of job security for mining affiliated jobs along with the permanence of alterations to the land’s ecosystems, and four principal mines producing either gold or silver are likely to close within the next three years.

Argentina’s largest open-pit operation, Bajo La Alumbrera, will continue to produce until the end of 2018. Goldcorp expects to remain a strong producer within Argentina honing in on investment for their Cerro Negro project, which poured its first gold in 2014. The nation will be watching Minera Alumbrera’s methodology while it begins to comply with its mine closure plan, as the environmental and socioeconomic impacts will set a major precedent for what is acceptable.

Meanwhile, there are a few advanced projects with the capacity to come online in the short term. Fortuna Silver’s newest acquisition, the Lindero gold project, is igniting positivity into the local value chain. Their aim is to commence construction in 2017 and begin production in 2018. “From 2017 on, there will be a lot of mining movement,” explained Adolfo Mimessi, general manager of INCOVI, a heavy equipment provider in Salta. “Almost every 15 to 20 days, people come in from abroad to discuss projects, which is an incredibly positive sign of what is to come.”

Lindero will also serve as the first metals mine in operation in the province. “We feel that it was a smart move to enter Argentina early,” noted Jorge Ganoza, president and CEO of Fortuna Silver Mines. “We took our decision to buy Lindero in February 2016, when Macri had barely been in government for three months. At the end of the day, it is a risk trade-off: some investors tell me that Argentina’s recent history has been very volatile, and I cannot convince them that this is not the case, but Macri is moving in the right direction.”

The gold price increase has helped producers such as Yamana Gold further develop the projects within their pipeline, and Cerro Moro is ahead of schedule with the first gold pour expected in early 2018. “We have been proudly exploring, operating and investing in Argentina since 2006,” said Mario Hernández, vice president of Yamana Gold. “The Cerro Moro project is a very high grade…we think this mine will be one of our cornerstone operations once it ramps up to full production.”

Yamana Gold’s Gualcamayo project has been producing since 2008 and their current exploration program aims to extend its life, and they are in search of partners to strategically monopolize upon the potential of their large scale, multi-metal, but primarily copper-infused, Agua Rica project.

Reactions to the productivity of the gold-silver project Don Nicolas have been mixed, given the imposed rationale behind its recent acquisition. Argentina enforces a strict import export value balance, which is supposedly why an electronic devices company purchased the Don Nicolas asset—to equalize their inflow and outflow of trade with Chile. CIMINAS, Don Nicolas’ new owner, has remained relatively under the radar with minimal announcements, but operators and service suppliers working on the project have evidence of signed contracts for the coming year to confirm progress. “We finished construction on a lab for Don Nicolas, and after February it will be fully operating within the mine,” noted Marcelo Tejada, managing director of Alex Stewart Argentina.

M3 Argentina, an engineering and consulting firm, has begun providing the project with assistance in “sales, international business, logistics, and engineering staff,” noted M3 Argentina’s managing director Manuel Teyechea. In 2013 CIMINAS agreed to completely finance the project in conjunction with Minera IRL, but in 2014 they acquired all remaining shareholdings for $11.5 million. “Don Nicholas has since seen significant investment, and substantial changes are underway,” said Brad Dormer of All Pumps Argentina, a supplier to the mine.

Hunt Mining’s La Josefina gold-silver project in Santa Cruz is very advanced, as their local subsidiary Cerro Cazador is in the process of transitioning from a mineral exploration company to a producer. In 2016, the company strategically acquired the Martha mine which lies within close range of their concessions. “We are currently re-commissioning the flotation mill of the Martha mine, as well as complimentary exploration to add more mineral resources to the company portfolio. We expect the mill to be operational by December 2016,” explained Danilo Silva, president of Cerro Cazador.

Metallurgical results yielded a recovery of 96% gold and 72% silver at the La Josefina, and logistical plans include utilizing the refurbished flotation mill for processing ore across internal projects.

According to an analysis conducted by BNamericas, Argentina has approximately $13.77 billion worth of copper projects waiting for more favorable conditions, including El Pachón, San Jorge, Agua Rica and the highly anticipated Taca Taca. “First Quantum’s colossal Taca Taca copper project is bringing $5 billion in investment and requires three or four years of construction,” explained Facundo Huidobro, president of the Salta Chamber of Mines. “The political idea of mining in Salta is that mining activities should be private. The government is not to be involved directly in the business of a private company,” he continued, which is why many mining projects within his province are soon to come online.

Salta is repeatedly considered the top mining investment destination within Argentina according to the Frasier Institute, with the province of San Juan ranked closely behind. Glencore announced that it will invest $3 billion to double its copper production within Argentina over the coming years, which would be a much needed boost so San Juan’s semi-stalled mining activity. Their El Pachon project is located in an area at an average height between 3,600 and 4,200 m only 5 km from the border with Chile. The altitude of the Andes provides interesting challenges for multinationals and large scale operations, requiring the logistical and adaptive expertise of  the local Argentinian people. “We have fifteen years of research in overcoming obstacles in high altitudes, difficult geography, and diverse climates under our belt, which is why we have grown to become the largest and principal telecommunications provider in the north and west of Argentina,” explained Emanuel Salinas, managing partner of local provider Integradata Solutions.

In the rural areas of the country, the majority of inhabitants still are not connected. “The government has been giving credits to providers to expand their services and in 3 years, 100% of the population in Salta, Catamarca, and Jujuy will have internet access.” In six months, the majority of the mountainous region will have communications connections available.

The new copper-gold-silver Filo del Sol project, which in 2016 was spun-off by the well-established operators of NGEX and DEPROMINSA, straddles the Chile-Argentina border with three quarters of the area within Argentinian territory. “Not many companies have the capacity to work across the two countries like this; there have only ever been five projects with cross-border protocols,” explained Martin Rode, South American exploration manager for Filo del Sol.

Barrick’s Pascua Lama project was another multi-national venture operating in conjunction with the Argentina-Chile Economic Complementation Agreement. The bilateral mining treaty that falls in the realm of this legislation was signed by both parliaments in 1997, as a result of years of lobbying by many of the majors operating in Argentina. Chile and Argentina have specially established border controls for mining companies operating within concessions that cross country lines, granting special access to privileges including water, immigration exemptions, health necessities, labor and materials. “Our workforce is mixed between Argentinians and Chileans and price determines which country we buy from: rigs are generally cheaper in Chile, whereas dozers are cheaper in Argentina,” explained Rode. “Under the previous government we had problems making orders in Chile because there were limits on how many dollars we could send across the border; this situation is now more clear.”

It will likely take a few years of reframing public opinion, more favorable commodities prices, and the effects of Macri’s grand policy shifts to reap a notably calculable difference in production, but the hype for Argentina’s mining future is charged by lithium and sustained by substantial resource speculation. “Most of our current work is related to gold mines,” noted Dr. Alejo Sfriso of SRK Argentina, “and we expect this to continue in the coming years. It might happen that something new, like development of electric cars, acts as a game changer in Argentina.”